Proseminar fellow Nicole Gervasio discusses the need for graduate students to have a "career design team"––and to overcome personal hesitations to reframe relationships they already have.

At Columbia University’s fall 2017 workshop for PhD students on drafting one’s own “career design team,” I found myself making connections to the text I was currently teaching first-year undergraduates. In Homer’s Odyssey, Athena tricks Odysseus into thinking he’s taking advice from his Uncle Mentor (seriously). Ultimately, Athena fulfills all six vital roles on this fool’s career design team: model mentor, morale-boosting coach, constructive critic (who we trust enough to be honest about how the world sees us), emotional supporter, provocateur (who challenges us to “stretch” our interests in new ways), and field expert (who can give us feedback on basic performance). But not all of us are lucky enough to have an all-in-one warrior-goddess descend from the sky when we’re lost at sea. How, I wondered, could I find my own mentor?

Many graduate students presume that their mentor and their dissertation adviser will be the same person—and for me, academically, this has been the case. But even the best advisers are often under-equipped for (or, unfortunately, sometimes patently disinterested in) giving feedback for nontraditional career options. As the academic job market was progressing for me in fall 2017 and winter 2018—and the silence on my applications kept expanding—I found myself trying to rediscover potential mentors in my existing network who would help me find alternatives. In the absence of an all-in-one mentor, I worried that I had been too slow on the uptake to pursue an alternative track, despite the inordinate amount of public humanities and administrative experience I’ve acquired in the course of my graduate degree.

A Connected Academics panel on libraries and higher administration in October 2017 gathered presenters from Columbia, my home turf—many of whom I already knew through sundry endeavors in my Ph.D. program—and caused me to think much more deeply about mentorship. Who are my mentors? Who would my mentors be if I chose them with more intention?

The Connected Academics panel ultimately helped me reframe my own Columbia connections. I have collaborated with one of the panelists, Eileen Gillooly, the executive director of the Heyman Center for the Humanities, as a public humanities fellow on a diversity-based literacy program I developed for underserved teens. Another panelist, Karla Nielsen, a curator and archivist at the rare book and manuscript library, has helped me put together library sessions with ancient texts for three literary criticism and “great books” classes over the last three years. For a human rights seminar I designed and ran two summers in a row, Pamela Graham, the director of the Center for Human Rights Documentation & Research at Columbia, strategized with me to create a pedagogical exercise on the Rwandan genocide using our Human Rights Watch and Amnesty International archives.

In each of these cases, my desire to be a better teacher motivated me to make these connections. Indeed, I didn’t even think of these encounters as “networking” when I introduced myself via e-mail. I had a concrete goal for my students, and I needed these experts to help me administrate that goal. At least, that was how I thought about our interactions at the time—practical, necessary means to an achievable end, not high-stakes, long-term relationship-building.

But now, rethinking those motives, I wonder: what’s keeping me from reaching out in exactly the same way for my own development, rather than my students’? Would making an introduction as a professional seeking advice really sound that different?

Probably not—and I’d bet the responses wouldn’t be that different, either.

The problem, I suspect, is a psychological hurdle that keeps many people, not just graduate students, from “imposing” on a stranger’s time —the fear that there would be “nothing in it for her.” Taking a Myers-Briggs personality test actually helped me see just how ingrained this compulsion is in my ENFJ personality type (extraverted; intuitive; feeling; judging). ENFJs are mobilizers, peacemakers, creators, and moderators; we’re good at (and indeed, quite hell-bent on) managing the happiness of crowds and serving everyone around us, even it compromises our own satisfaction. Although I took this personality test at the career design workshop I mentioned earlier, which Columbia’s Center for Career Education runs once a year, many free versions are available online for anyone to take.

Many teachers in general expend most of their time fulfilling tasks that proverbially have “nothing in it for them,” yet the notion of requesting that same attention from another human being is somehow inconceivable. Getting perspective from a personality test helped me realize that my preconception more likely represents an idiosyncrasy in my own personality, not the complex moral conundrum I was making it out to be.

Although my career center’s workshop prompted me to identify people who could collectively do for me what Athena does for Odysseus, anyone could rethink their networks to fill those six essential roles on their own personal career design teams. Where are the constructive critics, role models, life coaches, provocateurs, field experts and cheerleaders in your life? Beyond our dissertation committees, we all have professors outside our subfields or even departments whose classes we remember fondly. Many graduate students garner fellowships and part-time jobs at interdisciplinary centers on campus. Too easily, many of us take for granted librarians and administrators whom we see weekly. Even beyond academia, professionals at former  internships and even family, friends, and former colleagues may have jobs we aspire to.

Any of these people could outfit a career design team. The solution isn’t to wait for our own Athenas to swoop down for rescue, but instead, to reframe the ties we’ve already forged. 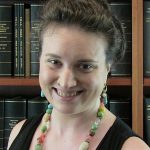 Nicole Gervasio is a PhD candidate in English and Comparative Literature with a certificate in women’s, gender and sexuality studies at Columbia University. Her research explores collective trauma, genocide, political violence, human rights, and state repression in contemporary Anglophone, Hispanophone, and Francophone literature from the Global South. She has received Beinecke, Javits, Mellon Mays, and Mellon Interdisciplinary Fellowships. A 2015–16 Public Humanities Fellow at Humanities New York, she is founder of the Kaleidoscope Project, a not-for-profit, diversity-based contemporary literature and creative writing workshop for teens in New York City

0 replies on “Where is My Warrior-Goddess?: The Search for a Mentor in Graduate School”