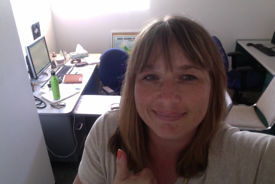 When I first set out on my academic journey, I never could have imagined where I’d end up. I know that may seem strange since most start college with some path in mind. But for me, college was more about figuring out that path. And while you’d think that by the time I’d been a university student for over thirteen years, I would know exactly what the final outcome looked like, other than multiple degrees in hand, I have only just recently discovered my path.

I spent a lot of time reflecting on my journey to a doctoral degree, wondering if I’d made the right choice. I hoped that I had but also feared that I had not. I wondered if I was bold enough to just walk away. What would that be like? Walk away from what? No one was forcing me to pursue the PhD. So when I thought about walking away, I was really walking away from myself and the fear of figuring out that path I started so long ago. As a high school dropout, I got my GED because I wanted to prove to myself that I could. And when years later I registered for classes at a community college, I did so with a sense of desperation and excitement. Recently divorced, raising three children, and feeling overwhelmed, I believed that an education was my only hope for a better future.

Yes, of course, I came to know the goal was to earn a PhD, and I planned to use that PhD to influence people in meaningful ways. But like so many other graduate students in English, I couldn’t be sure anymore what that meant. Did it mean I would be a university professor? Coming out of Arizona State University (ASU), a Research 1 institution, I knew that if I were to teach, it would have to be someplace small and teaching-focused. A community college? Teach five courses per semester, primarily composition? While I loved the community college atmosphere, carrying an exhausting course load was no longer appealing. And since I hadn’t taught in a few years (thanks to generous research assistantships), I wasn’t sure that I was headed to a career in teaching. Thoughts such as these were anything but comfortable. After all, telling your mentors, fellow students, and family that you are pursuing a doctorate but have no plans to teach is like riding a horse down the street, naked, during rush hour—people are horrified, judgmental, annoyed, and curious, while a few applaud the daring idea.

I took classes at the community college until I was advised that if I wished to continue my college education, I must transfer to the university. Until then, I hadn’t really considered that my time in college was more than just a quick means to an end—a skilled, higher-salaried job. But I admit that wasn’t entirely true because I loved taking classes. I thought the English classes were fascinating. I couldn’t get enough of Marxist theory, feminist theory, thesis statements, film analysis, and writing essays. I devoured works like Kate Chopin’s The Awakening, D. H. Lawrence’s “The Horse Dealer’s Daughter,” Flannery O’Connor’s “A Good Man Is Hard to Find,” and Toni Morrison’s The Bluest Eye. All the little details that other students found tedious and a waste of time, I marveled over, shared with anyone who would listen, and labored intently to learn.

So of course I transferred to the university. I worked toward my bachelor’s in English education until I followed my adviser’s suggestion of changing my major to English literature and applying to the graduate program in that field. After receiving my bachelor’s degree, I took a full-time position at my home university, but it was not long before thoughts of a doctorate called to me.

Starting the PhD program was just like those first days at community college. I felt overwhelmed, out of place, like an imposter. I struggled to find my voice. I struggled to remember why I was there. I sought out interesting assistantships, internships, and fellowships. I searched for my place. And with each new experience, I learned a diverse set of skills that took me a little closer to discovering my path. I learned how to manage projects, how to design a Web site, how to write and review a grant, and how to network. Although I was still not connecting all the dots, I was learning a set of metaskills (beyond the core skills of rhetoric and literary criticism). I had thought about my life as a student wrongly—that the classes I was taking, the papers I was writing, the exams I was completing, and my professional life were all separate parts, never to be merged. It wasn’t until I became ASU’s 2015–16 Connected Academics fellow that I learned how to think and talk about what I had learned on all parts of my journey through higher education as one cohesive skill set.

I didn’t know quite what to expect as I began my year as a Connected Academics fellow. I read the fellowship call several times and played around with the idea of applying, but my university expected me to teach composition, so I forgot about the call for several weeks. At the last minute, I decided the opportunity was just too intriguing, and before I could change my mind, I quickly applied. I am extremely fortunate that I made that last-minute decision because Connected Academics has given me the platform to inform others about the variety of careers for doctoral students in languages and literature just as much as it has taught me about those opportunities.

During my year as a fellow, I attended networking conferences and MLA sessions, organized wellness workshops, and facilitated conversations about pitching research, crafting an academic and digital identity, and using a humanities degree beyond the academy. I also met with various academic leaders from inside and outside ASU and had conversations in which alt-ac wasn’t a dirty word or something mumbled under the breath. I learned to stop feeling ashamed that I was earning a PhD but no longer desired a traditional tenure-track teaching job. I talked with others who were openly pursuing alt-ac careers, worked in alt-ac positions, and successfully remained affiliated with the university.

I came to realize that all my work during graduate school was just another “alternative” track in my more traditional teaching, research, and service history. Connected Academics taught me that I have transferable skills in both academic and nonacademic markets.

Thanks to Connected Academics and the support of those who believe in ensuring PhDs have the professional skills and ability to communicate those skills, I have recently accepted a position as a program manager with ASU. With this career choice, I still get to influence people in a positive way, use the skills that I learned in my doctorate program, and work in an environment where constantly learning is the only way to any recognizable path that has meaning. While this may not be where I imagined I would end up, I’m right where I belong.