During the 2017 MLA Annual Convention in New York City, I had the pleasure of participating in the inaugural Connected Academics Career Development Boot Camp. An offshoot of the New York City Proseminar on Careers, the boot camp was a four-day intensive workshop for exploring career opportunities beyond academia. Workshop topics were both practical (e.g., developing a social media presence, writing a résumé) and theoretical (e.g., identifying personal career values, reflecting on how graduate education might change for the future). Yet time and again, it was the spirit of reciprocity, and more specifically generosity, that animated the boot camp.

Academia is not known for its generosity, especially when it comes to career possibilities. The jobs are few and the narratives of linear ascent are restricted. For many graduate students, the academic job market evokes feelings of insecurity, anxiety, and resentment. A recent survey of the well-being of graduate students at the University of California, Berkeley illuminates this point: 64% of graduate students in the arts and humanities scored as depressed. Insecurity and anxiety are the felt conditions of late capitalism, where scarce resources and a diminished future combine to wear down the individual psyche. Retention, support, and mentorship of graduate students, as well as completion and placement rates, are all aspects of this larger crisis.

I’ve felt especially anxious about the insecurity of my position since I began the isolating process of writing my dissertation. I applied to the boot camp as an antidote to my isolation and anxiety. But as the boot camp approached, I grew worried that if it were a disappointment, if it turned out that other careers really were out of reach, then I would be trapped in my own powerlessness. Fortunately, the actual experience of the boot camp helped me realize that I was less isolated than I thought, and that one resource we gain as graduate students is a large, ever-expanding network of colleagues and fellow PhDs. By promoting generosity, by which I mean the non-competitive and collaborative investment in the success of many, we might be able to tap into this network and break out of that isolation.

Following my experience at the boot camp, I believe that fostering a culture of generosity within the academy is an important corrective to individual and collective experiences of insecurity. Generosity alone cannot dismantle structural insecurity, but it can go a long way toward protecting and retaining the vulnerable among us. Generosity might even challenge class difference and hierarchy by inspiring us to actively promote the disadvantaged.

My boot camp cohort exemplified this generosity. They shared their experiences and knowledge sets, and the group, in turn, became a collective resource to which we all had access. Participants mentioned repeatedly during the course of the week that the boot camp had fostered a sense of collegiality, inclusiveness, and support that was sometimes absent from their home institutions. This difference reflects the urgent need to develop a pedagogy, ethics, and politics of generosity within academia more broadly.

One way we might promote generosity within academia is by hosting more events that encourage participants to share their experiences and resources with one another. The Connected Academics-sponsored Showcase of Career Diversity might serve as a model. During the showcase, twelve individuals with PhDs in MLA or MLA-adjacent fields who are working outside the academy spoke informally with convention attendees in small-group informational interviews. Often the knowledge they shared was practical; for example, Josephine Livingstone, PhD in English from NYU and culture staff writer at The New Republic, explained to me how to craft a pitch email for online cultural criticism. More generally, however, they spoke of how the PhD experience either did or didn’t prepare them for occupations within and beyond the academy. They generously used their time and energy to share their stories and resources. And in so doing, they promoted the idea that graduate study need not be a zero-sum game. When we pull one another up to stand alongside each other, we improve the overall health of our disciplines.

One limitation of generosity is that it so often operates invisibly. It either occupies threshold spaces like conferences, or it is treated as too ordinary to merit attention. There are many examples of generosity within and beyond academia that rarely get cited. Highlighting these examples of generosity has the potential to demonstrate how the humanities and graduate degree programs are accessible—especially, but not exclusively, for those of us within the academy who do not feel at home within it.

I’m not sure my future will be within academia. Insecurity—both structural and personal—is related to the inability to account for one’s own future. But I am beginning to see how my possible futures will extend and continue these genealogies of generosity. 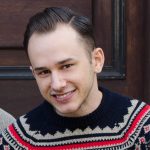 Matthew John Phillips is a Ph.D. candidate in English literature at Rutgers University. His dissertation examines forms of literary characterization in the nineteenth-century British novel—from “singular” characters to examples, exceptions, and types—alongside questions about personhood and social belonging in a globalizing era. His research thus brings together questions of literary form, economics, national identity, and imperialism. An article, drawn from his chapter on Robert Louis Stevenson’s Treasure Island, was recently published in Nineteenth-Century Contexts. He is a former Jacob K. Javits Fellow, as well as a former Graduate Fellow for the Center for Cultural Analysis at Rutgers. In addition to his research, he is also interested in fiber arts, food ethics, and animal rights.

0 replies on “Toward a More Generous Future”