Before November, I had never been called a race traitor. Canvassing for the Clinton campaign in Philadelphia’s Society Hill neighborhood, I anticipated an afternoon of group therapy among fellow liberals. The neighborhood appeared to be hermetically sealed against Trumpism. Quaint brick streets lined with Japanese hybrid cars. Studiously preserved revolutionary-era townhouses. Hillary and Bernie paraphernalia on nearly every window. It was in this liberal bastion of Philadelphia that I confronted firsthand this election cycle’s ominous subtext.

The man poked his head out of his door and called to me as I left a flyer on a neighbor’s door. He told me that I was in “Trump country” and that I had better “get used to it.” I assumed he was joking. But the man persisted, pointing his finger at me. “You’re helping them. They’re going to take everything from us,” he called. “You’re a traitor to our race.”

After he slammed the door, an old woman—his mother—cracked it open. She called to me with a thick Italian accent and apologized for his behavior. “I did not raise him like this,” she whispered.

I’ve developed an exoskeleton from campaign work. During the 2000 recount, a driver called my mother and me “crybabies” from his car window. In 2004, a man threw the scraps of a Kerry flyer in my face. In 2008, a swing-state voter called me a “liberal faggot” and slammed down the receiver. I understand that presidential campaigns are tumultuous, fractious, and deeply personal. They should be; there’s a great deal at stake. But I worry about the coarsening of public debate, the hardening of hearts to the struggles and aspirations of our fellow citizens, the increasing tribalism of American politics. How did we get from crybaby to race traitor?

Since the election, I have struggled to stay productive. My research, which has veered into antebellum nativist movements, offers little respite from contemporary politics. The archives where I do research often feel less like a refuge than a mausoleum. I spend my days in the company of dead writers and dead printers, examining a medium that is by all accounts well past its halcyon days. While I draw some comfort from comradery with other researchers, our conversations do little to allay my fear that I am not meeting the challenge of this moment, that, instead, I am using my work as a refuge from the atavistic churnings outside.

At the forefront of my misgivings is the fact that our fellow citizens—a majority in some thirty states—selected a candidate who appealed to their most tribal impulses. Clinton did not lose to John Kasich or Marco Rubio or Jeb Bush, men with ideologically troubling positions who nevertheless possess records of public service; she lost to a crass, willfully ignorant, morally and habitually bankrupt reality-TV star. Staying the course, donating to worthy causes, and signing online petitions seems woefully mismatched with the urgency of the political moment. Something is broken in the republican covenant. It’s likely been broken for some time, but I was too naive to see it. But now I can’t unsee it. It was written with spray paint in German six blocks from my home.

I’m not sure how I and my fellow humanists ought to answer these truths. Given that this election has revealed how much of the public eschews reason, civil debate, and the conventions of argument, I’m not persuaded that public intellectualism is a panacea. Nor am I convinced that we ought to employ methods of dissent that assume the centrality of our institutions. For example, a teach-in is unlikely to persuade someone who is unwilling to set foot on a college campus or, worse, who distrusts the entire enterprise of higher education. In the vernacular of the marketplace, the public ain’t buying what we’re selling.

What role, then, do humanists serve in misanthropic times?

Were I to write a longer piece, I might try to specify my use of the term misanthropy. Perhaps this election was less a repudiation of humanism than of rationality, in which case we might look to Plato’s concept of misology, or contempt for reason. Kant’s parsing of misanthropy—of fear (anthropophobia) and enmity—might enable us to think generatively about how to address the alienation and xenophobia that appear to have motivated many voters. However, I don’t think it requires an analytical leap to see that hatred, distrust, and contempt of human nature is in the water: Amazon’s best-selling fiction is a trilogy of dystopian young adult novels (Hunger Games); the most watched program on television depicts a postapocalyptic America overrun with zombies (Walking Dead); and the most popular movies evoke vengeance, extinction, and civil war (The Avengers, Transformers: Age of Extinction, and Captain America: Civil War).

That these types of stories are compelling isn’t to suggest that they’re aspirational. They play to our most poignant urgencies. Meanwhile, hope, though powerful in abstraction, is difficult to sustain. When it is predicated upon the power, virtue, or moral authority of an individual, it can even promote public apathy. (The 2010 midterms come to mind.) When it comes to articulating an alternative to despair, hagiography is a prescription for disappointment with the present and nostalgia for the past.

Perhaps, then, the role of the humanities isn’t simply to promote hope but to decentralize and democratize it: to locate possibility not in an individual, a savior who will rescue us from ourselves, but in a collective identity that respects the inherent and multitudinal value of individuals. Please allow me to explore this obliquely, by way of a memory.

When I went to college in central Florida, NASA launched three or four manned rockets each year from Cape Canaveral. Some of my friends would carpool to Daytona Beach to watch a launch. Others simply looked up; nearly everyone in Florida could watch the rocket draw a vaporous white arc across the sky. At first, I was skeptical of the whole enterprise. I thought about how those hundreds of millions of dollars could be better spent here on ground.

In my senior year, Maya Angelou changed my mind. She gave a talk at my school, part of which I’ll paraphrase, however inartfully. She asked us to imagine if, instead of sending astronauts into space, NASA selected ordinary people, at random, from across the planet—a carpenter from Missouri, a teacher from Malawi, a farmer from Malaysia. None of these individuals would necessarily contribute to the mission of space exploration, but they’d return from space having seen the planet through a portal window. They might even locate their home—a fleck of brown or green—somewhere inside that view. Neighbors and friends and family would hear about the experience from someone in their community, or perhaps a nearby community, evidence that their tribe was part of something larger.

Since NASA has suspended manned launches, Angelou’s vision appears increasingly quixotic. However, her question helped me understand why space exploration is important not only to scientists but to those of us who value human beings. For Floridians, those launches far exceeded their two- or three-ton payloads. Whether you lived in Kissimmee or Cape Canaveral, you could look up at the sky and see evidence of human beings transcending all corporeal constraints by dint of yearning, reason, and cooperation.

This, I think, is the humanist’s imperative: to set our neighbor’s sights higher, especially when it seems quixotic. Just as stories can weaponize misanthropy—an invasion of outsiders has come to hurt you and yours; you can only count on yourself; in this zero-sum world, another’s prosperity comes at the cost of yours—stories can also synthesize individuals into collective identities, expand the realm of the possible, and provide counternarratives to the despair and distrust for which there is all too much evidence. 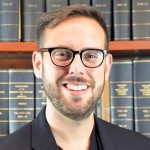 Will Fenton is the Albert M. Greenfield Foundation Dissertation Fellow at the Library Company of Philadelphia and a doctoral candidate at Fordham University, where he specializes in nineteenth-century American literature and digital humanities. His dissertation, “Unpeaceable Kingdom: Fighting Quakers, Revolutionary Violence, and the Antebellum Novel,” examines the discrepancy between fictional representations of fighting Quakers and their historical practices of pacifism and political participation. He is also creating Digital Paxton, a digital critical edition to the Paxton pamphlet wars (1764).

Will has served as the director of the Writing Center at Fordham University Lincoln Center, as editor of Eloquentia Perfecta, and as a teaching fellow. He is the recipient of a Haverford Gest Fellowship, a HASTAC Scholarship, and Fordham’s Innovative Pedagogy Scholarship and Digital Start-Up Grant.

His work has appeared in Slate, Inside Higher Ed, and PC Magazine, for which he writes a biweekly column, The Autodidact, on educational technology.