In January 2017 I had a great time live-tweeting the Connected Academics sessions at the 2017 MLA Annual Convention. Not only did the experience help me remain more actively engaged in the conference, but I also gained a new appreciation for the kinds of networking opportunities afforded by Twitter. Through live-tweeting, I’ve virtually “met” and followed others who share my interest in alt-ac careers, I’ve learned about a number of public humanities organizations I had no idea existed, and I’ve learned how to craft my online presence as part of a larger community of scholars who are thinking about how to be a connected academic.

Live-tweeting can be an excellent gateway to these kinds of opportunities. With MLA 2018 on the horizon, I wanted to share some strategies that I found especially helpful in making the most of the experience.

Not only is typing on a laptop often faster than texting into a phone, using a computer allows for the multiple windows, tabs, and documents (more below on why this is useful).

If you know you’ll be attending a particular session or event, create a Word Document (or its equivalent) where you list presenters’ full names, Twitter handles (be sure you have the right person!), session name, session hashtag, and conference hashtag.

Keep this document open while you are tweeting. That way you will be able to quickly and easily copy and paste this information into your tweets without needing to rewrite them. You will want to include session and conference hashtags after each tweet so that they reach folks following a particular session. Including presenters’ Twitter handles not only helps you give proper attribution; they may also retweet your messages to their followers or tweet a reply, allowing you to reach a broader audience.

Another time saver is writing up quick, generic tweets you know you’ll want to use in advance of the session, e.g. “First up at #MLA17, @MLAconnect’s session on live tweeting! #s123.”  You can then copy and paste it as a tweet at the start of the session.

This will allow you to follow multiple Twitter streams, such as the general conference hashtag and your session’s hashtag, as well as any “mentions” directed at you.

Being able to see what others are tweeting can help you avoid repeating something someone else has already captured (retweet them!) and also encourages you to engage in conversation with others in real-time. Seeing your “mentions” in its own stream is especially useful, since you can immediately respond or even correct something you’ve tweeted.

Think of tweeting as a way of taking notes, both for yourself and for others. Try to listen long enough to capture good “sound bytes” (quotable quotes, main ideas, questions asked by panelists and audience members) that are still short enough for a tweet (estimating this becomes easier with time––and with the new 280 character limit).

Sometimes I find the Word Doc useful for taking actual notes when I find myself in the midst of a really interesting but rapid-fire discussion; once I find a pause in the conversation (either because I finally “get” what is being discussed or because they move onto a new topic), I will then create a few tweets based on what I’ve written down. This allows me to feel less hurried so that I can actually process my thoughts before tweeting, and one upside is that I’m then able to send 3-4 tweets in quick succession.

If you feel that other live-tweeters have already covered the main points being discussed (which you’ll know by following the conference and session hashtags in their own twitter streams!), you can easily and helpfully supplement the live-tweet stream by providing links to any resources or organizations mentioned during the discussion.

I think live-tweeting is most fun when you don’t put too much pressure on yourself to capture everything. This works best when you know that there are other people live-tweeting (and again, you will know more about who and how many are participating if you follow your session’s stream). Even if you’re the only one tweeting, know that you are doing this as a public service for those who could not attend and as a way to help yourself stay engaged and attentive. Any bit you do helps! 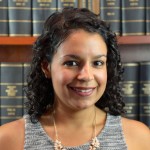 Carolyn Ureña received her PhD in comparative literature from Rutgers University in 2017 and is currently a lecturer in the writing program at Princeton University. She was a 2016–17 Ford Foundation Dissertation and Connected Academics Proseminar Fellow. She is also serving as coordinator and mentor for the inaugural session of the Connected Academics Career Development Boot Camp at the 2018 MLA Annual Convention.

0 replies on “Five Tips for Live-Tweeting a Conference”