As university students, even at the graduate level, we are often unaware of the broader network of academics present at a given institution beyond, or even underlying, the classroom experience. Thus the primary endpoint for the doctoral endeavor seems to be the professoriat. This goal always made me feel like a bit of an odd bird within the culture of my own department, since my intention in starting a doctoral degree in French literature had never been to become a professor. Not only was I older than most of my colleagues, but I had a different direction—and one that included remaining in New York City. I love teaching and was adept at literary analysis, but I’d never envisioned that combination as my principal direction, nor would I have been willing to follow the requisite path of hightailing it to the middle of unknown lands to follow said calling.

By the time I’d returned to graduate school at the age of thirty, I’d held various positions as a classroom instructor (in both French and English, here and abroad), worked as an assistant director of a study-abroad program in Normandy, and spent several years in university administration as an adviser to international students for immigration, academic, and cultural concerns. I’d also served on the regional board for our national association of international educators and helped coordinate several local, regional, and national conferences, while pursuing a fairly new personal passion for modern dance with a small company of international performers, having taken my first dance class at the age of twenty-nine. For me, that diversity of personal and professional experience was important and something that continued to play off of itself, even as I continued my degree.

My advice to grad students and “doctorants” (as the French say) is that they should gain as much experience in other aspects of the university while finding ways to use their passions and talents beyond the classroom walls. In other words, diversify. This is particularly relevant advice in an academic world that continues to expand its reaches and multiply its cocurricular and off-campus offerings.

There is an increasing proliferation of academic administrative positions within and beyond the university campus in education abroad, service-learning initiatives, academic programming, and partnership building.

As a grad student, I remained industrious, as underpaid graduate assistants are wont to do. I did a fair amount of private tutoring, was a substitute teacher at local middle and high schools, published five book translations, became an interpreter for visiting artists and dance companies, continued to perform as a dancer myself, and worked in high-end catering—for the likes of Barack Obama and David Bowie (guests), as well as Jacques Pépin and the longtime personal chef of Ingrid Bergman (bosses). Granted, I’ve been lucky, and although much of this experience may seem disparate, it became increasingly interwoven in terms of professional skill sets: my performance life enhanced my teaching while also expanding my opportunities as an interpreter in cultural exchange projects; my quiet servitude at staunch, high-level events further lent itself to interpreting at a range of diplomatic meetings and interviews at the United Nations and various nearby NGOs; and my experience with in-class curriculum design extended to understanding the learning objectives of university activities extra muros. The transferable skills then included the ability to make deadlines, to work with a range of cultural backgrounds and approaches as well as in various linguistic registers, and to think academically for a range of programs and projects.

As my years in graduate school waned, I worked as an adjunct professor at various universities in the area and was eventually able to transition back into university administration as an academic program adviser for faculty members seeking to develop short-term, high-impact experiences abroad. It seems to me particularly fitting to have an academic with experience in the classroom in this type of role. When I first began in my previous position at Adelphi University, where I was the assistant director for international education, I maintained my faculty position in the Department of Languages, Literatures, and Cultures and quickly bridged the tenuous relationship so often encountered whenever university administrators and faculty members are forced to cross paths and collaborate (some schools are markedly better at this than others). My familiarity with evolving university missions, partnership initiatives, and pedagogical design helped the faculty see me as a colleague “on their side,” something I try not to believe in but which is often expressed at some point during our meetings. In my current role as the assistant director of academics for the Office of Global Studies at St. John’s University, I continue to develop curricula, global service initiatives, cross-cultural training, student orientations, and program assessments, not only for our local faculty but in collaboration with our campuses abroad and with university and service partners worldwide. I am still engaged in the evolution of international education, which is where I feel I’ve always been since the start. My twenty-seven years on university campuses (yikes!) have felt both scattered and cohesive, and I’d urge my colleagues to strike their own unique and similar balance. 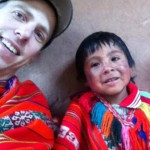 Gregory Bruhn is the assistant director of academics for the Office of Global Studies at St. John’s University.  Hailing from Maine, he had the great fortune to study in both Quebec and Normandy as an undergraduate before joining the Department of French at New York University for graduate work.  With over twenty years of classroom teaching experience, Greg has also led service-learning initiatives to Peru and Guatemala.